This International Championship course, designed by Stanley Thompson in 1928 can be played at any time on simulator at Golf en Ville, the premier commercial indoor center of Paris 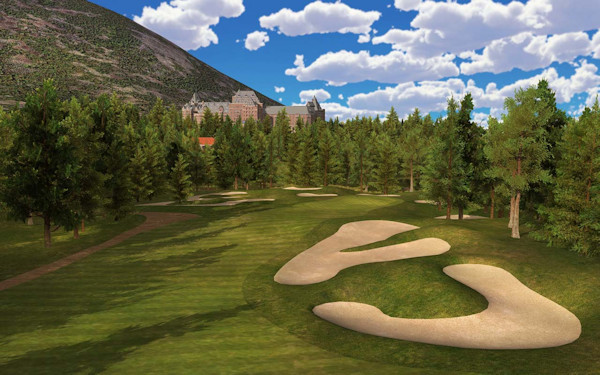 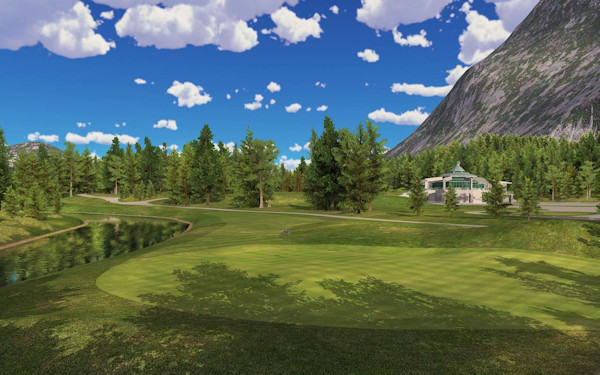 The spectacular Banff Springs Golf Course, located along the scenic Bow River at the foot of Mount Rundle, is the only course in Banff. It is both breathtaking and challenging. Banff Springs offers the 18-hole Stanley Thompson course, and the 9-hole Tunnel Mountain course. Total length of the 27 holes is over 7,000 yards (6,363 metres).

The original 18 holes at Banff Springs were designed in 1928 by Stanley Thompson, Canada's master golf course architect. Nine more holes were added in 1989, resulting in 27 holes of championship layout.

Many players, both amateurs and professionals, have described an optical illusion created by the surrounding mountains adding to the challenge of play.

The hotel that accompanies the course was opened in 1888 as one of Canada’s Grant Railway Hotels.
The Fairmont at Banff Springs has been affectionately nicknamed, ‘The Castle in the Rockies’. The architectural style is that of Scottish Baronial which is defined by: uneven roof lines, gables, and small turrets called bartizans.

The modern routing is slightly different than the original routing. Hole 15 used to be hole 1, which means hole 14 was 18. The current hole 1 was hole 5, and 18 was hole 4. The infamous ‘Devil’s Cauldron’ par 3, 4th was once hole 8, and came much closer to the middle of the round. The original routing improves the ‘flow’ and overall feeling of the course and arguably makes it better, but we’ll review the current setup!

Hole 1 – The course starts out with a pretty basic, 414 yard par 4. The tee shot is straight, with some mounding that separates the hole with the first hole on the Tunnel Nine, and forest right. There’s a bunker in the driving zone left, but three wood takes it out of play.

Hole 2 is a 171 yard, par 3 playing slightly uphill. In 1919, 10 years before Banff opened, Donald Ross originally had 9 holes designed here before Thompson ripped up most of the course. Rumor has it there’s 2 original Donald Ross green complexes (with a little bit of Thompson sprinkled in) that remain: holes 2 and 6.

Hole 3 is a really good par 5, playing 2 yards under 530. Banff’s elevation is somewhere in the 5,000 feet above sea level range, so it’s easily reachable, but it does play slightly uphill so it probably plays the number or just a bit under. A bunker is left, however for the modern era it’s not in play.

Hole 4 is the world-famous “Devil’s Cauldron” par 3. 192 yards on the card, playing over a glacier pond, the tee shot plays a club or two downhill to a natural punchbowl green with some fantastic Thompson bunkering. Truly one of the world’s best.

Hole 5 is one of the favorite holes. It is 424 yard par 4 doglegging around a bunker left that is a very big carry from the back deck. You really have to put together a good tee shot in the fairway and then a good short iron as the green is guarded left and long right by bunkering.

Hole 6 is a really intriguing short par 4. At 373 yards, it’s not quite drivable, but you can get close on a nice, warm day thanks to the elevation. The green complex, however, might make you think twice about that. First time around you might find this hole underwhelming as there’s no fairway bunkering and this is by far the easiest fairway to hit at Banff, and maybe in Alberta, but with a few rounds you start to recognize the genius of this hole.

Hole 7 is a longer par 5, playing two yards over 600. A massive bunker is left in the tee shot that is to be challenged if you want to have a better look at the green. The good news: it’s 260 or so yards to carry from the back deck, so even mid length hitters can probably get it over. The green is a very skinny green complex, especially with three wood, hybrid or long iron if you try and go for it. It feels like a maze trying to navigate the seven or so greenside bunkers.

Hole 8 is a cool little short par 3, only at 150 yards off the tee. The Bow River does come into play short and right, so club selection is key. It can be difficult adjusting to the elevation, so put a good swing on it to avoid the water and a bunker long. Controlling spin is key as you can spin the ball off the green complex back into the water on the right side.

Hole 9 is 501 yards, par 5, at elevation, it is so deceptively tough that it’s the smartest hole here. Down the entire right side of the hole is the Bow River, but it doesn’t really come into play until the green complex. Instead, the fairway falls off about 15 feet into thick rough. The hole moves to the right off the tee, suiting a fade, and the ideal play is to keep it right side fairway if you can. The genius of this hole is how hard the green slopes towards the water and bunker, right. If the player bails out left (and you could still be in the fairway), you’re left with a longer second shot going for the green to a downhill slope that always seems to kick hard towards the back right. If you hug the right side, you have a shorter club into a flatter angle into the green, but the green contours are so severe that nothing is guaranteed here. There’s a reason this hole is called “Jinx!”

Hole 10 is a 218 yard tough par 3. The front at Banff is pretty easy, outside of 4 & 5, and you can make eagle on all three par 5’s, so seeing a good score on the front is not shocking. A good score on the back, however, is a different story, and it starts with the 10th. With the bow river in play right and short right, it’s basically a longer version of hole 8. The green features a ridge in the middle, separating it into left and right sections. A bunker short left slopes hard towards the green.

Hole 11 starts a four hole stretch that usually plays straight into the prevailing wind. 417 yards on the card isn’t overly long, But bunkering left and right in the landing zone makes this a difficult tee shot. The coolest feature of this hole is the massive swale short of the green that you can’t see from the fairway. It looks like you’re able to run up the ball, and back in the day I’m assuming you needed to depending on the wind, only to be greated by your ball short because it landed into an upslope. A fantastic little design feature. A better looking at the sublime bunkering at Banff from the right side of hole 11.

Hole 12 is a little longer par 4 at 442 yards, still playing into the wind, with two bunker complexes on the left side of the hole. The Bow River decides to come back into play here for the final time, running down the entire right side of the hole. The hole features a really cool green complex, with a back tongue sandwiched between a very penal bunker left and the Bow River right. The front is completely accessible, however, so you can always just hit it to the middle and putt it up.

Hole 13 continues the incredibly difficult stretch that started at 10. The final par 3 of the round, featuring the same design feature on the green as 12 with that back tongue (sans Bow River, however), the hole plays a stout 225 from the back deck.

Hole 14 is a 440 yard par 4, with what feels like 100 bunkers on the hole. In reality, it’s closer to 15, with about 8 of those green-side, but that’s still 7 to navigate on this difficult, into the wind tee shot. The Fairmont Banff Springs Hotel makes for a great backdrop for the old 18th hole, now the 14th.

Hole 15 is a 475 yard, par 4 which tumbles down some 100 yards to a fairway that’s bunker-less until you get to the green. It is the most fun swing you’ll take all day, and would’ve been among the world’s best first opening tee shots. It helps that the tee box is right at the base of the Fairmont Banff Springs Hotel, too.

Hole 16 is a surprisingly difficult 414 yard par 4, now playing downwind. Thompson’s bunkering all blends in together, so it’s visually tough to tell where the landing area is. In reality, the first set of bunkers is only 210 or so to carry, whilst the second set of bunkering, way long, is closer to 320 to reach. 110 yards of difference, yet they look side by side.

Hole 17 is a short par 4 at 374 yards, ever-so-slightly moving to the left. The tee shot is ideally with an iron so you don’t bring the bunkering in play and leave yourself with an easy wedge. The bunkering here is yet again amazing, and is such a marvel to look at. The green complex here is absolute insanity.

Hole 18 would be a fantastic hole if it didn’t dogleg around the entry road. Long hitters literally hit it right over cars heads to cut the corner of the sharp dogleg right to get home in two on the 578 yard par 5 closer. Three massive bunkers are in the landing zone starting at 120 yards and ending around 80 yards out, so if you want a perfect 110, 95, whatever your number is you’re gonna have to hit a really good iron shot to stay on the short grass.

The green complex is well suited for run up shots, with only bunkering left and right, as well as OB right.
It’s hard to truly find a flaw at Banff. The only issue here is the routing, which is such a shame they relocated the clubhouse and driving range to accommodate the Tunnel Nine in the mid 80’s. The flow of the course feels off, and you don’t notice it until the 14th or so where you have to play what would be an amazing hole only for you to have a really awkward long walk back to 15, which would’ve been hole 1.

Regardless of the current routing, Banff is a spectacular golf course. The setting is unrivaled, and the quality of golf somehow lives up to that, too. One of golf’s true cathedrals.

Come and have a good time with your friends or by yourself, and play a round on Banff Springs - or one of the other 99 international courses available - on simulator, in very realistic conditions. We're just 15 minutes away from the center of Paris and easy to go to by public transport (bus, tram, metro or train) or.by car and there is plenty of parking spots around. Whether you've never played golf before, a beginner, a good golfer, or a pro, you will love it!