This International Championship course, designed by Bert Way (1929) & Robert Trent Jones (1960) in 1905 can be played at any time on simulator at Golf en Ville, the premier commercial indoor center of Paris 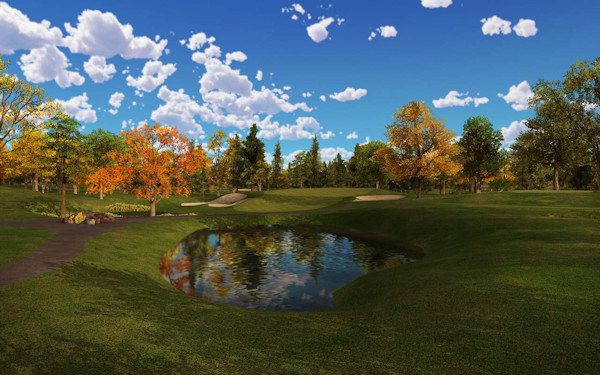 Firestone Country Club is a private golf club in the United States, located in Akron, Ohio. It is a regular stop on the PGA Tour and has hosted the PGA Championship three times. It is the current home of the Bridgestone Senior Players Championship through 2022.

One of four World Golf Championships constituent events, the WGC-Bridgestone Invitational, directed by the International Federation of PGA Tours and sanctioned on the PGA and European Tours, was contested at the club with the final event at the club held in 2018. The North and West courses also serve as the home course for the University of Akron Zips golf team.

This course was designed from the start to be championship level and has been the host of over 70 professional tournaments. After a triple-bogey at the 16th hole in the third round of the PGA Championship in 1960, Arnold Palmer called it a "monster." The name stayed and struck such a chord with frustrated golfers that the entire South course is now known fondly as "The Monster."

Noted for its length, the par 70, 7,283-yard South Course includes a series of intimidating, long par-4 holes and one of the longest par 5s anywhere. The 16th hole plays to 667 yards. A pond in front of the green captures its share of errant shots. Usually, the casualties aren’t the result of futile attempts to reach the green in two; they are third shots from players who hit errant tee shots and find the woods. A well-placed long tee shot does not guarantee the opportunity to get home in two.

The 16th hole doesn’t have the market covered on length. Before you get there, the par-3, 221-yard, 15th hole provides enough of a challenge. Its flat green makes for a straight putt, but getting the ball close to the 15th hole can be a problem. From the tee, bunkers on the left of the green are hidden and provide for unpleasant surprises.

If a 221-yard par 3 isn’t enough, try the 200-yard 5th hole. The small green can be reached with a 5- or 6-iron, but you might need as much as a 3-iron when the wind is blowing. Strange as it may seem, it is not one of the toughest scoring holes--that honor goes to two of the par 4s.

The 6th hole is 469 yards of challenge. It has ranked as the toughest for professionals at Firestone over the years. The 471-yard 4th hole is another test. All the hole asks a player to do is hit a long and straight tee shot, followed by an approach shot that must come in high to hold the elevated green. Sometimes this is easier said than done. But then again, that’s the best way to sum up Firestone Country Club’s South Course.

Come and have a good time with your friends or by yourself, and play a round on Firestone Country Club - South Course - or one of the other 99 international courses available - on simulator, in very realistic conditions. We're just 15 minutes away from the center of Paris and easy to go to by public transport (bus, tram, metro or train) or.by car and there is plenty of parking spots around. Whether you've never played golf before, a beginner, a good golfer, or a pro, you will love it!