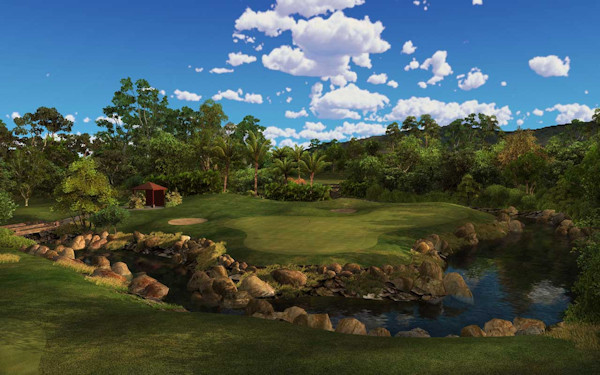 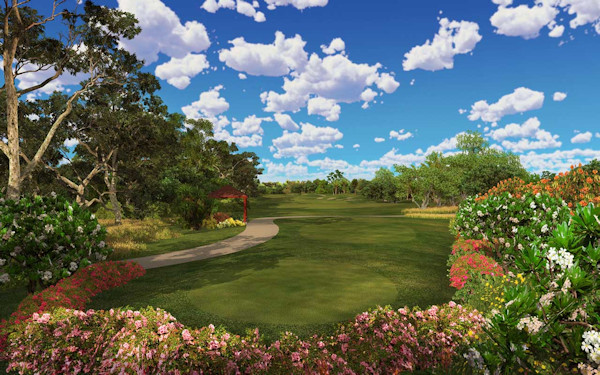 This is an iconic tropical North Queensland course.

The first time you play Paradise Palms, walking onto the 1st tee you are struck by the scenic beauty of the course and its surrounds.

The steep grade of the rainforest covered Great Dividing Range dominated the view and seemed to rise up to touch the sky from the edge of the course. Paradise Palms was then just six years old and had filled out beautifully with tropical vegetation alongside well-manicured rolling fairways, punctuated by man-made lakes, creative bunkering and several creeks weaving their way down from the escarpment. It was hard to believe this paradise, once acres of cane fields, was just 20 minutes’ drive from the centre of Cairns.

The former design team of Graham Marsh and Ross Watson created this tropical gem when commissioned by Japanese owners, Daikyo, to create Australia’s most difficult tournament venue. The duo successfully fulfilled the brief.

The ‘90s were kind to Paradise Palms in terms of its popularity. On the back of exposure hosting several professional events including the Skins Game and Ladies Masters, golfers from far and wide flocked to the North Queensland course where they were greeted by immaculately kept playing surfaces and the challenge of playing to their handicap, which was a rare feat.

By 2003, the quality of the experience was reflected in Paradise Palms’ No.9 ranking in the list of the nation’s Best Public Access Courses.

But the high standards set during its first dozen years started to wane, which coincided with a change in management within the Daikyo organisation. A cut in funding to the course was soon reflected in its presentation and the layout went into a steady but certain decline.

By 2013, Paradise Palms was again in trouble and its future in doubt when administrators were called in.

After such a grand entry into Australian golf it was sad to see how far this once great course had slipped. When Golf Australia released its 2015 ranking of Australia’s Top-100 Public Access Courses, Paradise Palms limped in at No.76 having dropped a massive 22 spots in the list. As far as the judges on the ranking panel were concerned, this once ‘must play’ layout was in free-fall.

Less than 10 months after the release of that ranking, Paradise Palms was sold again. Cairns businessman Darren Halpin and a group of investors bought the property – including the course, resort and areas of adjoining land for development – for a reported $20 million.

Within months of taking over, the owners began the first phase of returning Paradise Palms to its former glory as part of a $550 million redevelopment. Nearly $5 million was immediately allocated to upgrading the course, clubhouse and car parks. Within six months Halpin announced a partnership agreement with golf management company Troon Golf, which has a worldwide reputation for presenting its courses to a world-class standard.

“Paradise Palms is a terrific location with a great legacy. It has the blueprint to be one of the top resorts in the nation and we plan on taking considered steps to increase the quality and service standards,” Halpin said. “Troon has the experience to collaborate with us on the investment program and lay out a clear pathway to creating a stand-out experience that will build our reputation.”

The collaboration is already reaping benefits. Just a few months ago, with the release of Golf Australia’s 2017 Top-100 Public Access Rankings, Paradise Palms had rebounded to No.63 with judges enthused by what they had seen, especially its presentation.

A round now starts from the original 10th tee – a long par-5 with water flanking the right edge of the fairway for the second half of the journey to the green. The old par-5 1st hole has been reduced to a par-4 and plays as the new 10th hole with a new green built just beyond a water hazard that cuts the fairway in two. The new 11th hole is a par-3 with a tee constructed behind the new 10th green and plays to the original 1st green.

Almost 250 metres has been added to the length of the course in the past 12 months with new tees being built on the 1st, 2nd, 3rd, 4th, 10th and 18th holes, bringing a number of hazards and bunkers back into play.

The round now concludes on the original 9th hole, which has always been a strong par-4 at 383 metres from the tips but its role as the closing hole gives it even more punch. Dense bush lines the left edge of the fairway and spells almost certain trouble if you hit your drive here. Two relatively small fairway bunkers lie just right of centre fairway and if you can skirt the edge or blast over the sand with your tee shot you are well placed for your approach to the long, but narrow, putting surface. I found that the iconic clubhouse forming the backdrop to this green added significantly to the memorable finish.

Alone or with friends, whether you are a golfer or not, you can spend a good time and play Paradise Palms Resort (or one of other 99 international courses available) in the Paris area, on simulator, in very realistic conditions.

In one click, you can choose to play a selection of holes or the whole course; you can adjust about twenty parameters and display modes and customize the gaming experience and difficulty: the tee-box that is right for you, wind strength, pin position, green speed, fairway hardness, etc ...) or simply you can keep the settings that are available to you. You can also try one of the 35 scoring systems available, for more fun.

You can also choose to take a golf lesson on this course, and enjoy the precision of trajectory measures and the beautiful surroundings.

Please note that the severity index specified above is meant in ideal conditions i.e. no wind, pin position easy,...
If you add some wind, it's a different ball game, some courses can become very difficult.