This International Championship course, designed by Jack Neville & Douglas Grant (1919) Arnold Palmer & Thad Layton (2016) in 1919 can be played at any time on simulator at Golf en Ville, the premier commercial indoor center of Paris 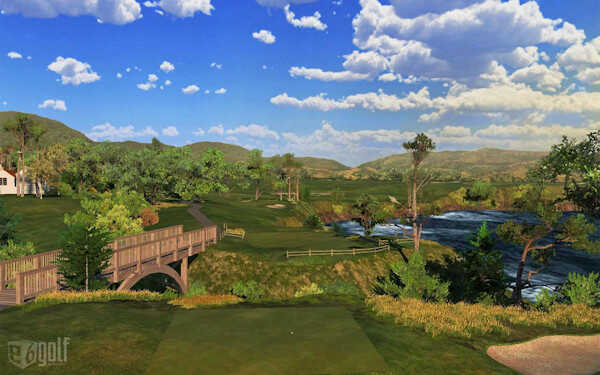 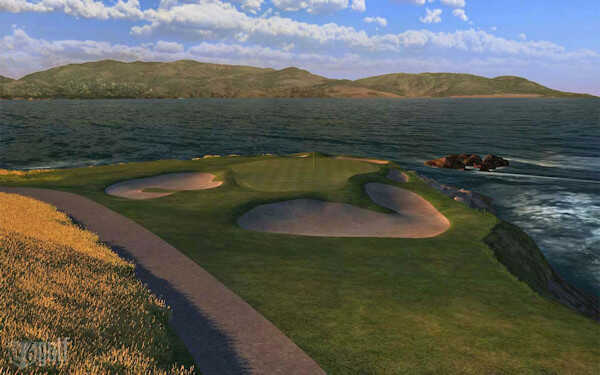 Widely regarded as one of the most beautiful courses in the world, it hugs the rugged coastline and has wide open views of Carmel Bay, opening to the Pacific Ocean on the south side of the Monterey Peninsula. In 2001, it became the first public course to be selected as the No. 1 Golf Course in America by Golf Digest. Greens fees are among the highest in the world, at $525 (plus $40 cart fee or $92.50 caddie fee for non-resort guests) per round in 2019.

Pebble Beach has hosted the U.S. Open five times, first in 1972, and most recently in 2010. It has an exceptionally distinguished set of champions including Jack Nicklaus, Tom Watson, Tom Kite, Tiger Woods, and Graeme McDowell. The championship is scheduled to return in 2019, as a celebration of the course's centennial. Pebble Beach was also the site of the PGA Championship in 1977, won by Lanny Wadkins in a sudden-death playoff over Gene Littler, the first use of the format in a major championship.

Many other high-profile championships have been staged on the course, including several U.S. Amateur Championships; Nicklaus won his second title in the event here in 1961. Eleven years later in 1972, he won Pebble Beach's first U.S. Open.

In 2023, Pebble Beach will be the first course to host a men's, women's, and senior men's golf tournament in the same calendar year, as the course will host the U.S. Women's Open.

In laying out the course, Jack Neville attempted to bring as many holes to the rocky coastline as possible. The first two holes are inland, the third runs toward the ocean, and the fourth and fifth holes run along the Stillwater Cove. Prior to 1998, the fifth hole was an uphill par 3, but after the Pebble Beach Company acquired additional ocean front property, Jack Nicklaus designed a revised hole that sits hard by Stillwater Cove. The sixth, seventh and tee shot of the eighth holes are situated on Arrowhead point. The second shot of the eighth hole and the ninth and tenth holes are situated above Carmel Bay.

The course then runs inland from the eleventh to the sixteenth holes. The Par 5 fourteenth hole has usually been one of the toughest holes on the PGA tour. The 16th hole runs alongside the 3rd hole to complete the figure 8 and bring the dramatic closing holes along Stillwater Cove. These include the long par 3 17th, whose place in golf history was assured when Jack Nicklaus (1972) and Tom Watson (1982) made key shots there to win U.S. Opens.

The short par 3 7th, which plays to just over 100 yards even during major championships, is one of the most photographed holes in the world. From an elevated tee, players hit straight out toward the Pacific Ocean, with nothing in the background but the often violent Pacific Ocean surf crashing against rocky outcroppings.

The long par 4 8th runs alongside the 6th hole leaving the peninsula and heading back toward the coastline. A dogleg right, the ocean is a constant companion along the entire right side of the hole. The landing area is extremely generous in width, but a long straight drive could leave the fairway and enter an inlet of the sea. Because the landing area is elevated on a cliff above the green, players have a good view of the small landing target a mid to long iron away. Jack Nicklaus has called this his favorite approach shot in all of golf.

The par 3 17th is situated on a smaller peninsula to the west of the one that holds the 6-8th holes. Although there is an ocean view and the sea runs along the left side, the primary challenge of the 17th is its length (playing 180-210 yards during championships) and its unusual shaped green. The green is long and thin, tilted about 45 degrees from the angle of the golfer on the tee. Depending upon pin position and wind, a golfer may use a great variety of clubs for the tee shot and, although the green is large in area, the landing area for any approach is relatively small. A large sand trap guards the front and left.

The 18th hole is a medium length par 5 (about 550 yards) with Pacific Ocean all along the left. What may be the greatest closing hole in golf was originally an unremarkable par 4. In 1922, William Herbert Fowler added almost 200 yards to the hole. This unique hole also features a tree in the middle of the fairway and a long 100+ yard bunker running along the ocean from the green, guarding the left side.

In addition to the lengthening of the 18th, the other most significant change in the course's layout came in 1998. Early in the course's history, a parcel of land along the ocean was sold off, forcing the 5th to run inland to where the tee of 6 now stands. As early as a year after that parcel was sold, the course tried to buy back the land but was unsuccessful until 1995. Jack Nicklaus designed a new par 3 on that land. Although it forces a long walk from the 5th green to the 6th tee, the course finally uses as much ocean real estate as possible, which was Neville's original vision. Recent changes done in 2008 were to holes 3, 6, 9, 10, and 12, which changed the dynamics of play with new bunkers located on each fairway. These additions were integrated for the 2010 U.S. Open, which also modified the 2nd hole to a par 4, which reduced the course to a par 71 for the championship, which was lengthened to 7040 yards (6437 m)

Come and have a good time with your friends or by yourself, and play a round on Pebble Beach Golf Links - or one of the other 99 international courses available - on simulator, in very realistic conditions. We're just 15 minutes away from the center of Paris and easy to go to by public transport (bus, tram, metro or train) or.by car and there is plenty of parking spots around. Whether you've never played golf before, a beginner, a good golfer, or a pro, you will love it!