This International Championship course, designed by Robert Trent Jones in 1967 can be played at any time on simulator at Golf en Ville, the premier commercial indoor center of Paris 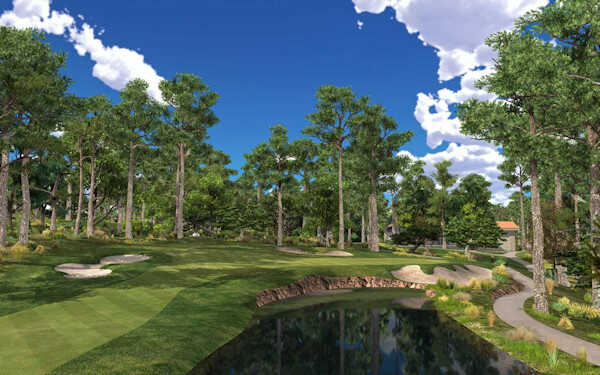 The Spyglass Hill Golf Course is a links golf course on the west coast of the United States, located on the Monterey Peninsula in California. The course is part of the Pebble Beach Company, which also owns the Pebble Beach Golf Links, The Links at Spanish Bay, and the Del Monte Golf Course.

It is considered one of the toughest courses on Earth from its Championship Tees. Golf Digest has ranked Spyglass Hill as high as fifth on its list of "America's 100 Greatest Public Courses". It has also featured in the popular Tiger Woods PGA Tour series of video games, along with "sister" course Pebble Beach.

Spyglass Hill was designed by Robert Trent Jones, Sr., and opened 53 years ago on March 11, 1966, after six years of planning, design, and construction. The course has been in the rotation for the AT&T Pebble Beach National Pro-Am, a February tournament on the West Coast Swing of the PGA Tour, since 1967. It plays at 6,960 yards (6,364 m) to a par of 72 from the championship (blue) tees, with a course rating of 75.5 and a slope rating of 144. The first five holes all have views of the Pacific Ocean, and the other thirteen wind through the Del Monte Forest. The course record of 62 is jointly held by Phil Mickelson and Luke Donald. The back tees at Spyglass Hill were called "Tiger tees" when it opened, long before the birth of Tiger Woods.

The first hole is called Treasure Island, and is a downhill 595-yard (544 m) par 5, which doglegs almost 90 degrees to the left. One of the more renowned holes is the fourth, a 370-yard (338 m) par 4 named Blind Pew, which Robert Trent Jones called his favorite par 4. The green is the most photographed on the course, and is surrounded by ice plant. Other hole names include The Black Spot (3rd), Captain Flint (10th), and Long John Silver (14th).

Each of the course’s 18 holes was named after a place or character in Robert Louis Stevenson’s Treasure Island.

For over forty years, it has also ranked among the Top 100 courses in America and the world

How to Play the Wild 4th Hole at Spyglass Hill

Robert Trent Jones, Sr. calls No. 4 at Spyglass Hill his favorite par-4 he’s ever designed. But he didn’t say it was his favorite to play.

The setting on the tee box is absolutely stunning — a peek into Cypress Point Club behind you, barking Bird Rock to your left, and waves of dunes in front of a camouflaged green straight ahead.

The approach shot is so intimidating that the likes of Dustin Johnson, Phil Mickelson, John Daly and Vijay Singh have occasionally eschewed it all together, instead taking aim at the green some 310 yards off the tee. (It’s 290 yards to carry the final dunes short of the green.) Johnson’s play is to aim at the right edge of the greenside bunker, and draw it in.

At the widest part of the fairway, you are 160-170 yards into the green. That’s fine normally, but that green is so small for that length of shot. Hitting a 7-iron or a 5-iron into that tiny green is tough.

The shorter the club you can hit into the green, the better your scoring average is going to be. But what happens is the fairway gets very narrow the farther you drive the ball – as narrow as 20 yards.

The aggressive line is to aim out at the first green in the distance with a driver. The safer play is to hit a 220-230 shot at the set of grey power boxes through the fairway, which should leave you less than 150 yards to the green.

If you have between an 8-iron and a wedge, that changes how you attack your approach shot. You can play offensive vs. defensive.

When the flag stick is on the lower half, that’s really the easier second shot. You have the entire green complex to land the ball into.

Players think intuitively, you want to land the ball short and bounce the ball down there. But the target is so tiny, it’s actually a more difficult shot. You’re making the wrong choice. You need to have the courage to fly the ball all the way to the flag.

When the flag is up top, you have to play it short, because the green pitches away from you, and the ball is going to roll forward. If the flag stick is at 145 yards and just short of the plateau, you probably have to hit it 130 yards. You don’t want to hit it 140 yards and have it roll down the slope. Three putts – and even more – are very common from there.

Come and have a good time with your friends or by yourself, and play a round on Spyglass Hill - Golf Club - or one of the other 99 international courses available - on simulator, in very realistic conditions. We're just 15 minutes away from the center of Paris and easy to go to by public transport (bus, tram, metro or train) or.by car and there is plenty of parking spots around. Whether you've never played golf before, a beginner, a good golfer, or a pro, you will love it!