This International Leisure course, designed by Jay Morrish in 2009 can be played at any time on simulator at Golf en Ville, the premier commercial indoor center of Paris 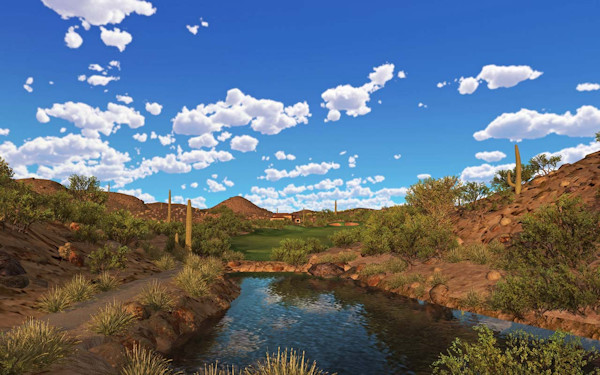 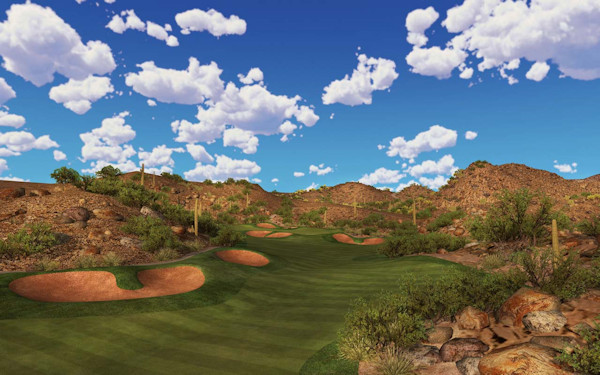 Situated at the base of the picturesque Tortolita Mountains, Stone Canyon provides the most spectacular desert setting anywhere. With views of the majestic Santa Catalina Mountains everywhere you turn, golfers will be amazed by the breathtaking beauty. From the rock formations to the thousands of giant saguaros overlooking the lush, green fairways, tees and putting surfaces.

The golf course itself encompasses 18 uniquely designed golf holes, with teeing options ranging from 5,100 yards to over 7,300 yards. Each hole has a minimum of 5 tee pads making the course enjoyable for the beginner golfer, yet challenging for the accomplished player. The course provides ample landing zones off the tee along with multiple risk reward options throughout the layout. Undulating, bent grass greens and strategically placed bunkers, provide a fun challenge for all those who play. If 18 holes isn't enough, Stone Canyon's 19th hole, a 107 yard par 3, is perfect for settling your bets or practicing your short game! It's easy to see why Stone Canyon is consistently ranked among the best courses in the country.

A relatively gentle starting hole that favors a tee shot down the left center of the fairway. The golfer will have a short, timid approach shot into a large green protected by a massive bunker on the left.

The shortest par five on the course may be reached in two strokes by longer hitters with the drive down the right side of the fairway short of the wash. From this position, the player may lay up with a short to mid iron.
Some players might prefer to hit a long iron or fairway wood to a green that has a narrow opening protected by bunkers and rock outcroppings.

The longest of hitters may try to clear the rocks on the left, leaving a short pitch to the green. The large fairway bunker on the right serves as a perfect target to a beautiful dogleg left par four by positioning the ball on the right hand side. The player will have the best angle to attack the green, a green protected by bunkers on the left and right.

Accuracy, not length, is the objective on the attractive uphill par for a well position, tee shot will split the fairway bunkers, leaving a short iron into a large two tiered green, surrounded by two strategic and challenging bunkers. It is important to be on the correct level of the green. If not, three putts will be the norm.

This majestic hole is where the Stone Canyon Club earned its name.
Impressive rocks and saguaros blanket the hills. A tee shot down the center of the fairway will leave a short to middle iron to a two tiered green. Be sure to place the second shot on the correct here.

The shortest hole at Stone Canyon. What it lacks in length, it makes up with beauty. A waterfall cascades down the left side of the green and flows into the bottom of Echo Canyon. Be aware the false front and the front of the green and the shallow bunker behind the green puts a premium on distance control in the swirling winds.

This uphill par 5 requires a drive down the right side of the fairway. If the golfer wishes to reach this hole in to. A precise second shot is needed to avoid the three greenside bunkers and rock outcroppings. The wise player will lay up to a short iron and attack the flag from there.

This par four plays dramatically uphill and offers the most difficult tee shot on the course. It's crucial to find the fairway and play second shot to the most undulating green at Stone Canyon. 4 is a great score.

As you pass lookout point ten tee pads, provide multiple options for our players from the championship tee the green lights 160 feet below and provides a spectacular view of the tour Toledo Mountains. Swirling winds may club selection, a challenge this large green is set in the valley and protected by deep bunkers to the left.

The elevated tees of this magnificent par 5 looked down upon a generous landing area.

The player has several options for the second shot. Long hitters may get home in two, requiring a long carry over the lake. Players who lay up will be challenged to select the right club. The small green is protected by deep bunker on the right.

A straightforward par 4. A solid drive will lead a long to middle iron to a green protected by three bunkers.

This difficult dogleg right par four requires a long tee shot down the left center of the fairway if missed.

The player has a blind approach. The second shot plays slightly uphill and requires an accurate approach to a multitiered green. Any approach shot which falls short and they roll back down the fairway.

A short par 3 set at the base of the scenic tautly the mountains. This gorgeous hall requires a solid tee shot towards a large green with three bunkers. A well struck T-ball offers a birdie opportunity.

To pass zigzagging through the desert.

This monster par 5 offers several options a conservative tee ball maybe aimed left of the right bunker. A more aggressive play favors the left center of the fairway. The rock outcropping at the end of the fairway serves as the target for the second shot. A middle to long iron shot remains going over a deep wash to a long, well, bunker green.

A long par 3 requires a well-placed tee shot toward the left front of the green, avoiding the collection area, short, right. The large green is protected by a bunker to the left and right. Take a three and head to the next tee.

The shortest par 4 at Stone Canyon creates the ultimate risk reward hole. The copper T Towers high above and gives all who play a panoramic 360 degree view of the surroundings. A driver hit off line will end up in the rocks, laying up with a long iron 4 fairway.
Wood is the wise choice. From there you are left with a wedge or a short iron into an undulating green protected by three bunkers.

Arguably the most spectacular finishing hole in golf with the magnificent Catalina Mountains providing the backdrop for viewing Tucson's stunning sunsets. This par for dogleg slightly to the right and downhill. It is important to place your tee shot down the left side of the fairway and short of the bunker. This will be the best angle to play the second shot.
The massive bunker to the left forces the player to favor the right side of the green. Rated the third best course in Arizona and one of the best golf communities in America.
Stone Canyon is so much more than a spectacular golf course. It's an experience.

Come and have a good time with your friends or by yourself, and play a round on Stone Canyon Club - or one of the other 99 international courses available - on simulator, in very realistic conditions. We're just 15 minutes away from the center of Paris and easy to go to by public transport (bus, tram, metro or train) or.by car and there is plenty of parking spots around. Whether you've never played golf before, a beginner, a good golfer, or a pro, you will love it!