This International Leisure course, designed by Fred Couples in 1999 can be played at any time on simulator at Golf en Ville, the premier commercial indoor center of Paris 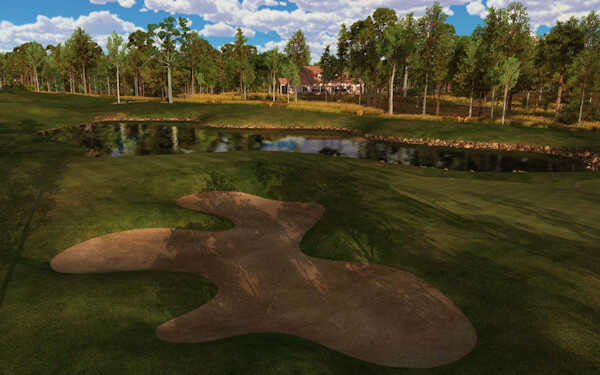 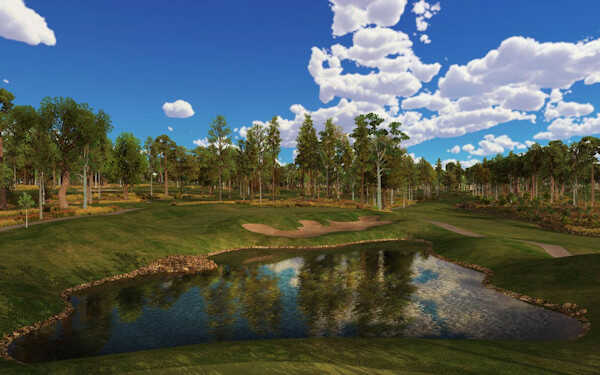 Westfields Golf Club located in Clifton Northern Virginia is one of the most highly-awarded public golf courses in the United States. The course plays through natural wetlands, beech trees, oak trees, and rolling hills making it a challenge and pleasure for golfers of all skill levels.

The course was designed by Fred Couples in 1999. In lieu of “Champions,” or “Black Tees,” the longest track on the golf course is eponymously named for Couples, “The Boom Boom.”

Westfields Golf Club was nominated as one of the “Best New Courses,” by Golf Digest.

Since 2008, the course has been recognized as an Audubon Cooperative Sanctuary, for its sustainable water usage.

Ranked as one of “America’s Top Golf Courses” by the Zagat Guide.

The first hole is an uphill par 4 that plays slightly longer than the indicated yardage. A forced carry off the tee sets up a middle iron to a large, undulating green. Although it is without bunkers, this demanding hole sets the pace for a challenging front nine.

The second is a medium length par four, which requires a tee shot that negotiates bunkers on both sides of the fairway. A short-iron approach must carry the greenside bunkers to a green that slopes from back to front.

Westfields' Signature Hole is this par 3, playing 223 yards from the Boom-Boom tees. The tee shot must avoid the lake to the left of the green. If you choose to bail out right, you may find the large greenside bunker. Three puts are common on the large, L-shaped green.

The first of our three par 5s requires a straight tee shot between the large oak trees on the left and the receptive fairway bunker on the right. The second shot must avoid the fairway bunkers to set up a short-iron approach to the large, undulating green.

The fifth is the first of three long par 4s on the front side. A solid tee shot must avoid the fairway bunker on the left side. A long-iron approach follows to a long, narrow green with mounds on the left and a depression on the right. Par is a very good score.

This is the longest par 4 on the course, playing 473 yards from the Boom-Boom tees. A long straight shot must split the fairway bunkers to properly set up the long second shot. You can bail out to the left of the well-guarded green, but getting up and down from there is difficult.

The second par 3 on the front side is the 180-yard seventh. There is a severe drop-off on the left side of the green, which contains three deep bunkers. A large ridge running through the middle of the green will challenge even the best of putters.

This par 4 is Westfields' toughest hole. A tee shot down the left side of the fairway is required to avoid the large oak tree that guards the green's right side. The cluster of fairway bunkers and a large greenside bunker are ready to catch errant second shots. Four is an excellent score here.

The tee shot on the ninth hole must split the fairway or stay short of the well-placed fairway bunkers. A middle-iron approach shot must carry an environmentally-protected wetlands area. Three bunkers guard the medium-sized green. Four is always a good score on this hole.

The tenth is a medium length par-4 that favors a right-to-left tee shot. The ball will be slightly above your feet for a middle or short iron approach to the unprotected, two-tiered green. This is a good starting hole for the shorter, but challenging back nine.

This par 5 features a landing area with mounds in the middle of the fairway and a large bunker on the left side. A second shot to a sloping fairway sets up a short-iron approach to a difficult, undulating green. The large greenside bunker adds to the challenge.

The 12th is a tough par 3 with out-of-bounds along the right side. A large bunker guards the front right of this extremely challenging green. A large mound in the left-center of the green creates some impossible two-putt situations. Making par is very impressive.

The 13th features the course's only blind tee shot. A Civil War burial site comes into play on the right side. Deep, punishing bunkers guard the large, multi-tiered green. A back left pin brings a ravine into play; finding it guarantees a high score, so play for the center of the green.

This drivable par 4 is only 285 yards long from the Boom-Boom tees. A drive left center will feed down to the green for a possible eagle bid. However, a large bunker guards the green's front right side. With scores ranging from eagle to triple-bogey, this short hole provides plenty of excitement.

The picturesque 15th requires a forced carry tee shot over a pond to a wide rolling fairway. A blind, uphill second shot must find the fairway to set up the approach shot to a large, three tiered green. Three accurate shots and one good putt can make this three-shot par 5 a birdie hole.

A creek guards the left side of this par 4 before emptying into a pond in front of the green. A right-to-left tee shot that avoids the right side bunker will set up a middle to short-iron approach. The wide but shallow green is a rather small target, yet putts of 50 feet or better are common.

Don't let the yardage on this short par 3 fool you; it is still fairly difficult. Tee shots must carry a small pond and a large greenside bunker to find the large green that sits diagonally to the tee box. Yardages increase as pin placements are moved from left to right.

This par 4 18th is a classic finishing hole. Only a straight tee shot will avoid the fairway bunkers and allow you to access the green. Second shots must carry a native grass waste area. Even if you reach this large, undulating green in two, two-putting for par is not guaranteed.

Come and have a good time with your friends or by yourself, and play a round on Westfields Golf Club - or one of the other 99 international courses available - on simulator, in very realistic conditions. We're just 15 minutes away from the center of Paris and easy to go to by public transport (bus, tram, metro or train) or.by car and there is plenty of parking spots around. Whether you've never played golf before, a beginner, a good golfer, or a pro, you will love it!